Clay Marzo (born in 1989) is a professional surfer from Hawaii, famous for his unique “double-jointed” style of turns and spins. He became a highly skilled competitive surfer at a young age and has been hailed for his creativity with the board and his innovative maneuvers.

As a member of Quicksilver’s Young Guns crew, Marzohas appeared in two Quicksilver surfer movies, alongside other notable surfers such as Dane Reynolds, Julian Wilson and Kelly Slater. 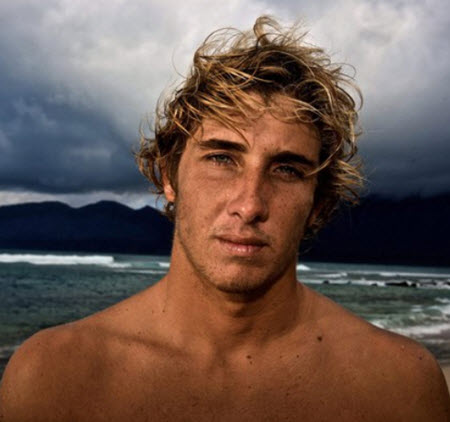 In 2008, Jamie Tlerney and Strider Wasilewski directed the documentary “Clay Marzo: Just Add Water”, a move that explores Marzo’s life as a surfer and as a person with Asperger syndrome.

Marzo was diagnosed with Asperger syndrome in December 2007. Prior to this, his behavior on the pro-circuit had led to notable friction, as he had problems connecting with fans, sponsors and fellow surfers. He didn’t follow the expected rules as surf competitions and he got a reputation for being painfully honest. At the same time, Marzo was (and is) intensly focused on surfing and has been admiringly described as a person with an intuitive understanding of the waves.

Marzo volunteers with the non-profit organization Surfers Healing which arranges surfing camps and surfing experiences for children with ASD in the United States and Canada.

Marzo can often bee seen rubbing his hands together at a rapid pace.

Clay Marzo grew up in Lahaina, Maui, Hawaii and started entering surfing and swimming competitions at a very young age. At 10 years of age, he won the 200-meter freestyle event at the Hawaii State Swimming Championships. The following year, he took the bronze spot at the National Scholastic Surfing Association’s (NSSA) National competition and signed a pro contract with the Quicksilver team.

At the age of 15, Marzo won the NSSA National’s, after becoing the first person ever in the history of NSSA to achieve two perfect 10’s. A year later, Marzo became the NSSA Open Men’s National Champion.